David Cameron states that exposing the hundreds of paedophiles that work in parliament is a witch hunt against gays...

David Cameron was suggesting that gays are paedophiles and I find that extremly offensive.

I am gay and I am not a paedophile. I dedicate time outside of my work to exposing the paedophiles in British establishment.

Why has Mr Cameron made this association? If anyone's  responsible for a witch hunt on gays it's him for them comments.

I applaud Phillip Schoefields bravery in presenting this information to Cameron, SOMEONE NEEDS TO ACTUALLY DO SOMETHING ABOUT ALL THESE PAEDOPHILES RUNNING OUR COUNTRY.

Furthermore someone in Camerons position shouldnt be talking like this, but then he shouldnt be protecting paedophiles either. Just for your information, I have a list of previously convicted paedophiles and sex offenders who work in parliament published on my website for all to see. The truth will come out, help hide it and you will be held responsible by the people.

Ok, bit of a rant and I was limited to 1000 letters so its a bit brief but just getting my point across.

In Thursday's This Morning interview, Dickhead Cameron was being quizzed about historical claims of a paedophile ring linked to No 10 when he was unexpectedly handed a list of names by Phillip Schofield, which the presenter said had been mentioned online as paedophiles. 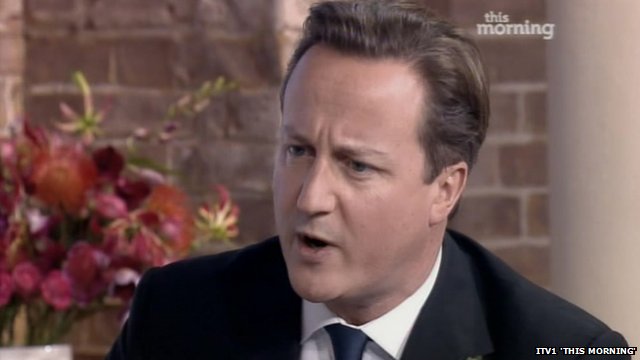 Mr Cameron, who did not look at the list, said he was "worried" that speculation about unproven allegations could lead to a "witch-hunt particularly against people who are gay" and advised anyone with evidence of abuse should go to the police."