FRAUD! Brexit result was accidentally published BEFORE you had voted

What you are about to read is, for me, absolute proof that Brexit was predetermined.

My partner took a screen shot of an article he found on 'The Telegraph online' the day before the Brexit result was announced, when people were still voting.

At the time, we obviously didn’t know the result of the referendum because it was still taking place, so we did not know the significance of what we had managed to capture. But fortunately, I did post the screen shot of the article on Facebook seen below with no alterations other than to hide peoples profile pictures and names. Subsequently the online article very quickly disappeared from The Telegraphs website. 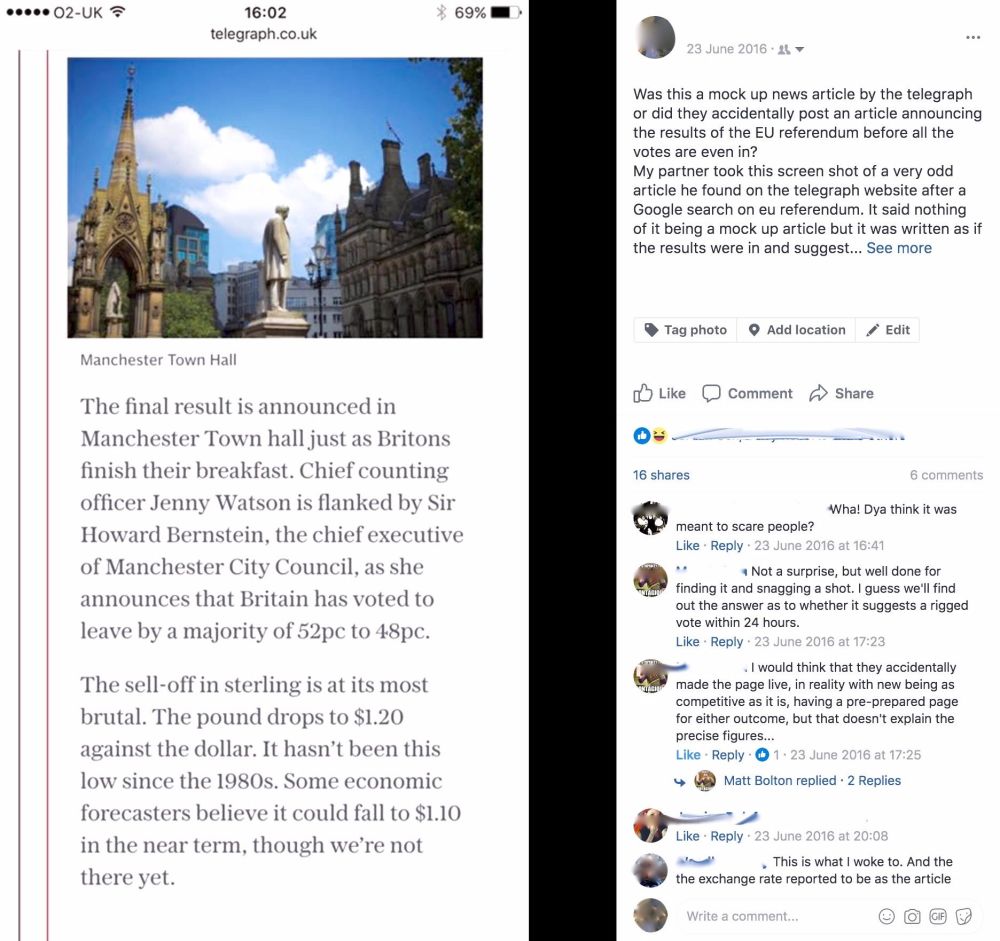 Unfortunately, the only people who can confirm this to be genuine are the few people who saw this post when I initially uploaded it to Facebook on the afternoon of 23rd June 2016, several hours before the public voting had finished. I'd stand up and swear on this in a court of law, if necessary, (I’m certain Facebook would have the data which proves when this was first uploaded), but no one has ever taken any notice of it... I shared this numerous times on Facebook and Twitter with barely any responses except for a few friends, you can see from the time and date stamps on the comments that these posts were made before the votes had been counted.

When we woke the next morning to realise that the articles ‘predictions’ had come true we were shocked but not that shocked really, mostly just surprised we had snagged a picture of the evidence and presented it to people beforehand. I contacted Newspapers and Media outlets with the story and the evidence.

I did not get a single response from anyone.

I have no agenda. I’m not looking to overturn the Brexit result with this information, and I know that’s not going to happen. I would have voted leave anyway, so it was the result I wanted, but I didn’t vote because I’ve been saying for years that voting is rigged. This for me was the absolute proof, solid evidence which I held in my hand, predicting the exact result of the referendum BEFORE you had finished casting your votes.

Once again, it brings me back to something I say regularly, forget the details, they are irrelevant. People talked Brexit to death in the months leading upto it, and they still haven't shut up. These idiot political commentators that have talked for hours and hours and hours about how Brexit will affect trade, health, travel, farming and everything else, arguing between each other about the intricate details of European policies and various regulations which may come into play.

Tell me how any of that matters when it’s all been provably set up? If these people can't see it, then they're even more stupid than most of them look. We are being taken exactly where the elite want us. Brexit wasn't a democratic decision, actually i think the leave votes would have been far higher in reality, but that doesn't matter, it was predetermined, just like every other 'story' you hear being rammed down your throat by the media. Even the covid story was simulated BEFORE the first cases were identified in Wuhan. 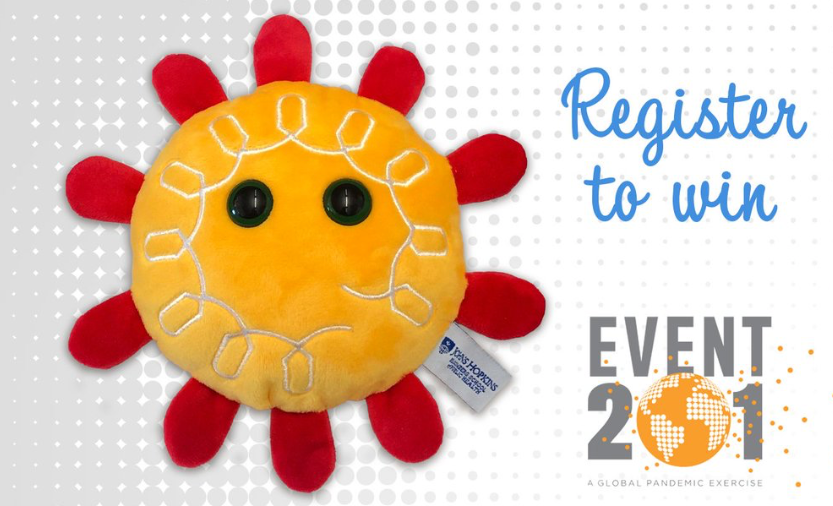 A simulation called ‘Event201’ was held in New York on 18th October 2019, almost 2 months BEFORE the first cases of Covid-19. Led by The Johns Hopkins Center for Health Security, the World Economic Forum and the Bill and Melinda Gates Foundation. Apart from a giveaway of free cuddly covid toys (this is how twisted these people are) Event 201 was a rehearsal for what was to come. Read the full details.

This is nothing new, many examples exist where the future is seemingly predicted or reported before it happens. Does anyone remember building 7 on 9/11? It was the third building to collapse in New York that day. A lot of people forget or simply don’t know that 3 buildings collapsed on 9/11. Astonishingly, no concrete building has ever collapsed due to fire, but building 7 it is claimed did just that.What is even more astonishing is how both the BBC and CNN managed to report this news more than 20 minutes before the building had been demolished. The BBC report with Jane Standley is a dead giveaway. She is being interviewed from New York telling viewers that “Building 7 has just collapsed due to damage from the towers collapsing” and yet she is standing in the live picture with Building 7 burning away in the background to the right of her head, quite clearly still standing. 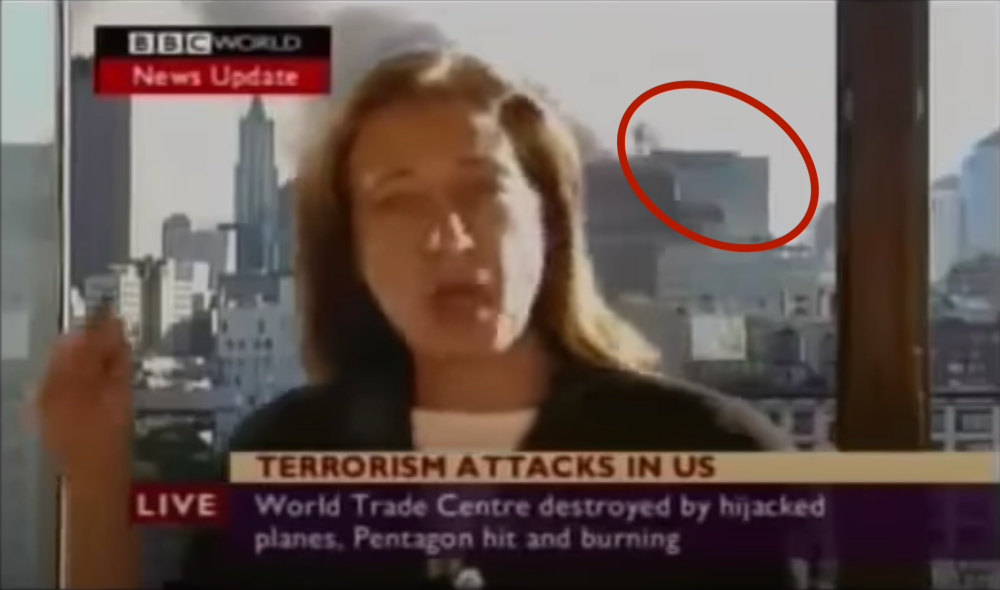 Above: Jane Standley reports live on BBC that WTC building 7 has collapsed when it is clearly still standing. Connection was conveniently lost with Jane when the BBC realised their mistake.

Below: WTC building 7 as seen above before the collapse which looked like a perfectly executed controlled demolition.

It remains the only concrete and steel building in the world to have collapsed due to a fire.

You can search these videos online; I’ve only added a screenshot of the BBC report as they are always being deleted but usually reappear elsewhere. This one currently works but probably won’t for long: youtube You can simply search something like, ‘building 7 still standing in background news report’ or words to that effect and you’ll find the footage.

That’s what makes me sick about these pathetic excuses for journalists, they are knowingly feeding us lies and misinformation that destroy lives.

What kind of person does it take to lie about something like 9/11 as its unfolding? Is it calculated, or just ignorance?

Nearly 3000 people died because of the 9/11 attacks, many more since from the toxic dust that engulfed the city. (Not to mention the phoney war on terror that followed the false flag attack and the complete lies about WMDs in Iraq.) Is she really that ignorant? Absolutely not, I simply can’t believe that. Fortunately for Jane, the BBC had kept her at a safe distance sparing her life but giving her the perfect view. In the 20 years that have passed has Jane Standley never questioned what happened that day? Her salary depends upon her not asking those questions. I hope it was worth it Jane, you psychopath. How do these people live with themselves? I guess this is the sort of person who would sell their own child for the right price, and probably did when Jimmy Savile was still hanging out at the BBC. It is not safe having these people on our streets, let alone reporting on our news, they are dangerous to society.

No mainstream journalist will escape the day when all the lies come out and they are held to account for their part in all of these lies and death. Justice will come in one form or another. It simply must.  Thanks to Jane Standley's lies, (and failure to ever question what she reported), she, and others, were misinforming people about an event that led to a long-drawn-out war on terror in which many countless people have needlessly been killed - and continue to be today as a result.

Thanks to the lies and misinformation delivered by political commentators, journalists, and the media in general we have seen small businesses and previously stable companies collapse due to Brexit regulations, taking incomes and homes away from families trying to make a living.

Now, thanks to the same people, we have a false pandemic whereby a virus that doesn’t exists is being used to destroy our entire global society. The same liars in the mainstream are promoting a DNA altering vaccination, that is killing people, to retain our ‘freedom’, which, vaccinated or not, is eroding by the day.

We must stop supporting the mainstream media. They are government propaganda machines and a cancer on humanity.