Queen Of the United States of America?

She's not just there to scrounge benefits of the State...

The British Monarchy wields more power today than we are led to believe. As well as being the head of the Church of England, by Law the Queen can: 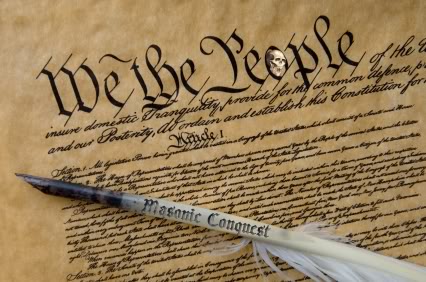 The United States of America claimed 'independence' in 1776. The fact that this was also the year the Bavarian Illuminati was formed is, of course, highly significant. Independence was an illusion, and still is.

Amazingly, defying all odds, all 43 Presidents of the United States, (up to Obama, who's true name and nationality has been called into question), can be traced on the same family tree. Thirty-Three of them alone go back to Charlemagne, one of the most famous monarchs of what we now call France. Freemasonic historian Manly P Hall, who was a Freemason himself, documents that out of the 56 signatories on America’s declaration of independence over 50 were known freemasons.  And all 56 who signed the declaration were cousins, and of a royal bloodline.

In 1783 US congress ratified a contract which stated;
"All bills of credit omitted, monies borrowed and debts contracted by, or under the authority of congress before the assembling of the US in pursuance of the present confederation, shall be deemed and considered a charge against the US for payment and satisfaction where of the US and the public faith are hear by solemnly pledged."

These loans were owed to the British crown. Therefore, by loaning the money Britain knowingly funded both sides in the American War of Independence. The funding of both sides of a war is another familiar method used by the illuminati.

The Virginia Company was the corporation headed by the British crown that controlled the 'former colonies' before the manufactured war of independence. The main stockholder when the original charter was completed on 10/04/1606 was King James I of England.

The charter established the following (which still applies today);
- The lands of the Virginia company were granted to the colonies under a deed of trust (on lease) and there for Americans cannot claim ownership of the land. This was retained by the British crown.
- The colonial lands were to be governed by two colonial councils, each with 13 members, but the Kings council in London had the final say on all decisions.
- The sitting British monarch can choose the Governor of the American Colonies, (the President).
- The monarch insisted the Christian religion be imposed on all the people, destroying the native culture.
- The criminal courts on the lands of the Virginia Company were to be operated under Admiralty Law*, the Law of the Sea, and civil courts under common Law, the law of the land.

*US Code title 18 B 7 says that Admiralty jurisdiction is applicable;
1. On the high seas
2. On any ship
3. On any lands reserved or acquired for the use of the US, and under exclusive or concurrent jurisdiction thereof, or any place purchased or otherwise acquired by the US by consent of the legislature of the state.

After the war of independence the corporation switched names, changing from the Virginia company to...  The United States of America, The USA, or the US.

This means the Unites States of America is not a country, it is a corporation, and it is owned by the British crown.

No law has ever been passed to introduce the charging of personal income tax in America. It's a fraud.

On the uniforms of US troops, in federal buildings, in criminal courts and even when the president is giving a statement, the US national flag is always displayed with a gold fringe. The gold fringe indicates it operates under the jurisdiction of commercial law, known also as British maritime law and the uniform commercial code (UCC).
To think that the US Government and the legal system works within the American Constitution set up by the founding fathers is wrong. Just like the monetary system, it’s all corrupt and unconstitutional.

The British created the illusion that it had lost its Empire over the two centuries that followed the War of Independence, but Britain had simply exchanged overt control for covert control. (See my article on the Illuminati for more background)

Ultimately, however, this is not about the British Empire either - Britain is just another corporation and it is owned by the Vatican.

The more you dig, the more you find. Now you can take all of that at face value or you can start to verify it for yourself, see what else you find.