We are misled into believing we live in a Physical word. This creates a material world.

In a material world success is measured by your job title, the size of your house, the cost of your car and the clothes you wear. It's important to look the part and always present an image of yourself that you want others to see. Materialistic success can be won through sheer selfishness, causing misfortune to others, even murder. Morals, humanity, empathy, kindness and love, for example, do not need to enter into the equation, and often don't.

As a result, many people living in this immaginary material world spend their lives in a state of depression because, according to their materialistic beliefs, they have been unsuccessful.

I liken it to classroom bullying, whereby kids either conform to the latest trends and have the latest gadgets or face bullying and ridicule for their parents not being able to afford them.

This system of materialism is a calculated design fault within the bigger mind manipulation that I have been describing. It creates massive divisions of people, ultimately, those with, and those without - What better example expresses this than the current grievances the people of Chelsea and Kensington currently have regarding the social housing issues following on from the tragic Grenfell Tower Fire in June 2017.  It's being branded as social clensing by many, myself included.

But think what this means on a global scale, you have those who have expensive lavish houses too big to utilise, filled with priceless furnature that will never be used, a collection of ever changing cars in the custom built 12 car garage with the heliport on the roof overlooking the private golf course... and on the other end of the scale some people were born into families so poor they weren't even educated to read or write - their lives consist of fighting for survival while people are dying all around them every day from malnutrition, disease and hunger in places that have no access to clean water, where food is scarce and disease is rife.

Materialism is bull shit. We are spiritual beings, having a human experience, we have become detached from our higher consciousness by allowing fear and manipulation to rule us, fear of being different, not up to societies standards or the odd one out. And because of this fear, people buy into the goods which will make them 'better people' or help them fit in with everyone else, or the most common mistake, because it will make them happy.
It won't.


In Ancient history there is a common theme of oneness, unity, or consciousness. 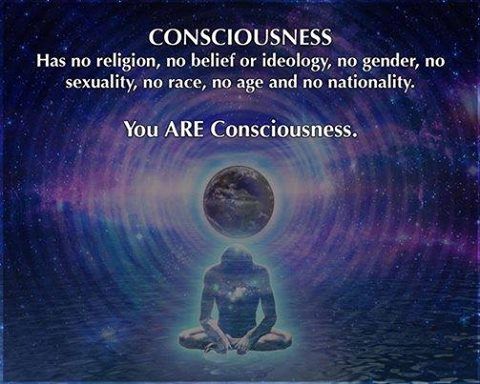 Science, is slowly catching up with what many humans have been saying for thousands of years, everything at its core, is one, there is no you and I, simply, one.

In particle physics and physical cosmology, the Planck scale is an energy scale. In terms of size, the Planck scale is unimaginably small (many orders of magnitude smaller than a proton). All the fundamental forces are unified at that scale. That is to say that the core basis of the universe is a single universal field of intelligence which connects gravity with electromagnetism with radioactivity with nuclear force and so on, so that all the forces of nature are one.

The body is like a biological computer, it is not you. It is simply your vehicle to experience this reality we call life.

We cannot become literally detached from being infinite consciousness, just detached from the awareness that this is what we are. We identify ourselves as being the experience we are having because of the illusion that we perceive in our programmed mind - and our minds have been programed for thousands of years to keep us from knowing that we are infinite consciousness.  Perhaps when we know, and truly understand this, we will be free? Afterall there are people who are experiencing this sort of 'enlightenment' or 'awareness' all over the world, and have been doing so for many centuries.


The analogy researchers use to describe the human body as a computer is one which is quite fitting. Look at DNA and cells which make up the human body, they work like a hard drive, storing out all the information about each persons genetic make-up, which has been 'downloaded' through procreation.

As an electrical appliance ages, it gets slower, less efficient and eventually stops working. The body computer does exactly the same. As we age, we can't process information the same way we used to, our ability to learn and take things in starts to degrade. Just like a computer the body can't 'run' as efficiently when it reaches this time, slowly our body computer begins to 'fail' and we eventually 'die' either through illness, disease or what we refer to as 'old age'.

However we do not die or cease to exist, but we stop experiencing this version of 'reality'. The computer operator (infinite consciousness) still exists and will continue to exist infinitely.

What science is starting to understand now is that we are all consciousness, we are all infinite possibility and infinite knowledge. We live in a thought world, where you can literally create your own reality. Having done a bit of research into Lucid dreaming, I feel ties in with this whole 'creating your own reality' idea perfectly. The brain can be trained to lucid dream, and those who are able to successfully do this are able to become consciously aware of when they are dreaming and with the conscious mind aware, can control their dreams.

When we are 'awake' our thoughts, emotions, movements and everything we do is the result of an electrochemical process in the brain whereby signals being sent to the brain are decoded into information. This information becomes what we see, hear, smell, taste, touch and think. Something can be so real to taste in a dream because your brain is decoding the information and this same electrochemical reaction takes place in the brain telling you "this has a sour/sweet/spicy taste" for example. There is no difference in the brain function in a so called 'conscious' state to that of a dream state. The reality is, none of it is real, or its all real, however you want to interpret it.

Is your mind boggled yet? Or is it just starting to unboggle?

What we have just been discussing is what can be describe as the five sense manipulation - We are fooled into believing that real is what we can physically see, hear, touch, taste and smell in our 'conscious' state, however, this is an illusion. Let's take it another step further to explain.

You are maybe sitting in a chair while reading this, maybe your standing, but check the chair or check the ground beneath your feet, they're solid and real aren't they? You might believe it is solid but science itself calls this theory into question. Science says that what we see in the form of solid objects, people, buildings, cars or the Earth, for example, are made of atoms. An atom is an electrical-vibrational field consisting of electrons orbiting a nucleus of protons and neutrons. More than 99% of an atom is empty space. Therefore science has concluded that atoms are not solid.

If atoms are not solid, how can they be described as the fundamental building blocks of solid matter?

The 'solid' world only appears to be solid because our brain decodes the vibrational energy fields around us (atoms) into experiences such as sights or sounds for example.

Consider the fact that scientists say at least 95% of mass in the universe is 'dark matter', we can't see dark matter because it doesn't reflect light. Basically, dark matter is energy vibrating at a different frequency to that which humans can perceive, it doesn't physically exist in our 'reality' as we cannot see it or touch it - But, we know energy which cannot be physically seen does exist. For example, radio waves cannot be seen or touched, but if you switch on a radio and tune it to a certain wavelength, or frequency, it will pick up the signal being broadcast at that frequency and you can listen to the radio. When you turn off the radio the radio waves don't disappear, simply the radio stops to decode the waves into information. These radio waves can pass through seemingly 'solid' objects like walls because both the radio waves and the wall are energy vibrating at different frequencies, they don't interfere with each other. Same principle when you tune your TV to BBC1, that picture exists physically on your TV screen while all the right electrical systems are there to decode the information, but when you switch channel BBC1 doesn't stop broadcasting, simply the TV (Brain, decoder) is no longer experiencing BBC1 because it is tuned to a different frequency.

So, the solid world, is not solid at all it would seem, and this starts raising all sorts of questions about the nature of reality...


For a deeper understanding of what I am talking about here please watch the following two videos with John Hagelin PhD. In these two videos he gives us some amazing information about the Physics of consciousness.