Charles Manson once branded “the most dangerous man alive”, passed away on 19 November 2017. Manson was incarcerated for 46 years for being the hippy cult leader responsible for masterminding the crimes that ended the sixties in a bloodbath of murder on the nights of August 8/9, 1969.

The most famous victim of the 'Manson murders' was actress Sharon Tate, the pregnant wife of film producer Roman Polanski. 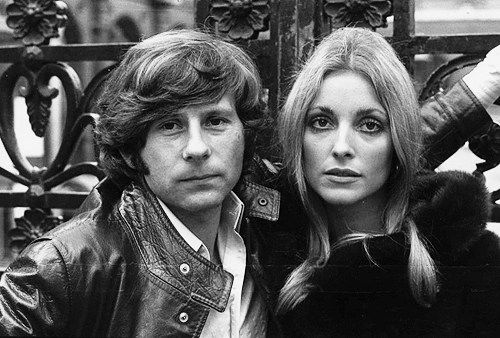 Above: Sharon Tate with Roman Polanski

Manson was also later convicted for his involvement in the killings of stuntman Donald ‘Shorty’ Shea and musician Gary Hinman, but what makes Charles Manson interesting is not what he did, but rather what he didn’t do…

Manson wasn’t even at the Tate residence where the most brutal and bloody mindless violence took place and six lives were cruelly taken, (including Tate’s unborn baby).  Nor was he in the LaBianca residence when Leno and Rosemary LaBianca were brutally killed.  Bobby Beausoleil killed Gary Hinman, again, Manson was not present at the murder, and Donald “Shorty” Shea’s body wasn’t discovered until 1977 - 6 years after Manson had already been convicted.

Besides the possible involvement in the murder of Shorty Shea, which is questionable at best under scrutiny of the evidence that exists, what exactly did Manson do that led to the most expensive murder trial in American History?

The mainstream narrative is quite a story, and just the sort of thing you’d expect to find among other perhaps seemingly far-fetched conspiracies, except there’s one difference, this time it is the mainstream media that are trying to sell the narrative of mind control, devil worship and death cults…

Charles Manson is said to have mind-controlled his ‘family’ of followers to go out and commit crime and murder on his behalf, targeting rich white people so it would start a race war between white and black people and advance Manson’s fiendish plan. This plan, the prosecution made claim, was called Helter Skelter. (This entire theory was based on the words “HEALTER SKELTER” being left in blood at one of the crime scenes, and also led to the fictitious theory that Manson was obsessed with the Beatles, in particular, ‘The White album’, which contains the song ‘Helter Skelter’). The prosecution claimed that Manson believed the Blacks would win the war but would lack the intelligence to rule after Helter Skelter, and so, after waiting in hiding, (in a cave under the desert, of course), Manson and his followers would emerge to rule over the blacks, who would apparently welcome the wisdom and leadership of Manson... This is the official narrative, although none of it can be substantiated, except by the statement of one witness, Linda Kasabian. 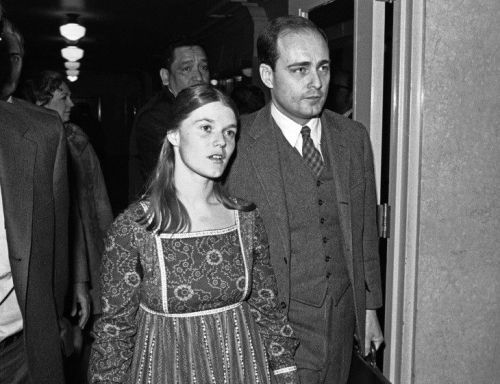 Linda Kasabian was present at both murder scenes. Kasabian stole the wallet from Steven Parents dead body. Kasabian watched on and did nothing as helpless victims ran out of Cielo drive and were stabbed multiple times on the front lawn. Kasabian did nothing to stop the murders, including that of Sharon Tate's unborn child. She facilitated the murders by driving the group to both murder scenes, after which she also tried to cover up the murders by taking the weapons, wiping them clean, and dropping them in a ravine.

Despite being a crucial participant at both murder scenes, Linda Kasabian was offered immunity from a desperate prosecution, on the condition that her testimony supported the prosecution’s case against Manson. No murder weapon had initially been found and there was very little forensic evidence. Before the trial began one of the defence attorneys was famously quoted as saying ‘all the prosecution has is two fingerprints and Vince Bugliosi’

Kasabian inevitably took the immunity deal and walked free. Her testimony condemned Manson, without which the prosecution had no case.

Most people have no idea that there is another side to the Manson myth, or that most of what we have been led to believe about it was largely fabricated by the prosecution itself - with no tangible evidence to support it.

Bugliosi and his prosecution team had to build the case against Manson from the ground up until it formed an unbreakable wall of 'circumstantial evidence' that led the jury to find Manson guilty of 'conspiracy to murder' and that those he sent out to do the slayings (Charles "Tex" Watson, Susan Atkins, Patricia Krenwinkel, and Leslie Van Houten) were all willing and active participants. At over nine-months, it was the longest and most expensive trial in American history, yet without Kasabian, the prosecution had no case, a fact admitted after the fact by prosecutor Bugliosi in his ficticious and overblown book, Helter Skelter. 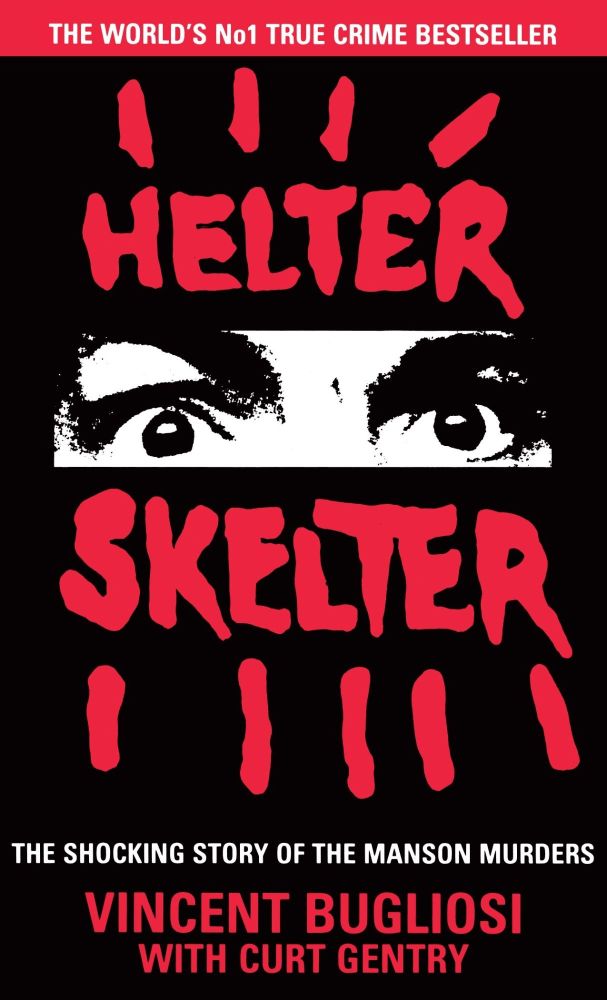 Charles Manson, Patricia Krenwinkle, Susan Atkins, and Charles ‘Tex’ Watson were convicted of first-degree murder and sentenced to death, later life in prison due to a change in state law regarding the death penalty.

Charles 'Tex' Watson brutally beat and murdered victims at both scenes, he even carved the word WAR into the chest of a dying Leno LaBianca after beating and strangling him and his wife. Watson was present when Sharon Tate was pleading for the life of her unborn child, Charles Manson was not present. 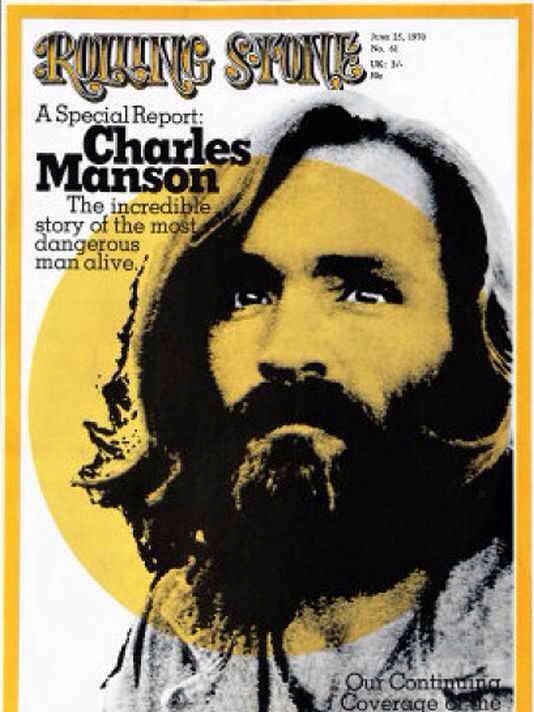 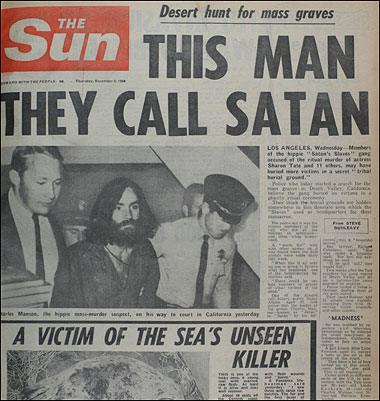 Why isn’t Charles ‘Tex’ Watson the name most associated with these murders?

Why did Manson, and not Watson become the face of evil?

Why was it so important that Manson was convicted when the prosecution already had the actual murderers on trial?

Why would the prosecution grant immunity to one of the main facilitators simply to get a guilty verdict on someone less guilty?

Was there an ulterior motive to systematically discredit the anti-establishment hippy lifestyle?

Manson was essential to create the image in people’s minds that hippies were dangerous; Tex Watson, although clearly more ‘dangerous’ than Manson, did not fit the profile of ‘The Hippy Death Cult Leader’ or ‘The most Dangerous Man Alive’, he was 23, had short hair and a clean-shaven baby face, most importantly though, he did not look anything like a hippy. Manson, however, did look like a hippy; long hair, beard, untidy, shabby clothes, bare feet, he played guitar and made his own music, he was respected and influential among his friends, he lived off the land, disobeyed authority, saw himself as a free spirit, enjoyed drugs and sex and he was exactly the sort that young girls everywhere were shacking up with in communes across America. He fitted the profile exactly. 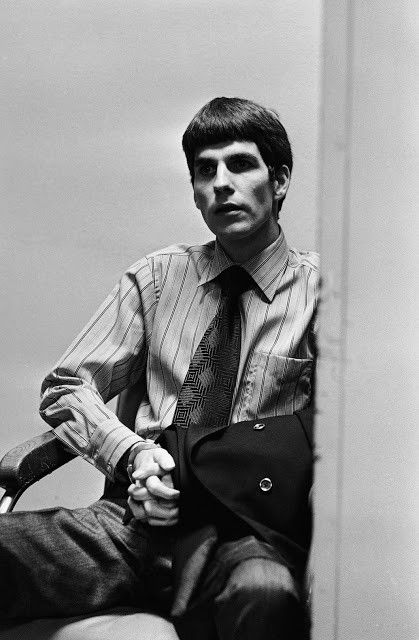 Above: "I'm the Devil, and I'm here to do the Devil's business" - Clean cut, definitely not a hippy, Charles 'Tex' Watson brutally shot, beat and stabbed victims at both murder scenes and carved the word WAR into the chest of a dying Leno LaBianca after beating and strangling him and his wife.

Below: Charles Manson. Representing every 'hippy' in America and beyond. Manson was not even present at either murder scenes during the time of the so-called 'Manson murders'. 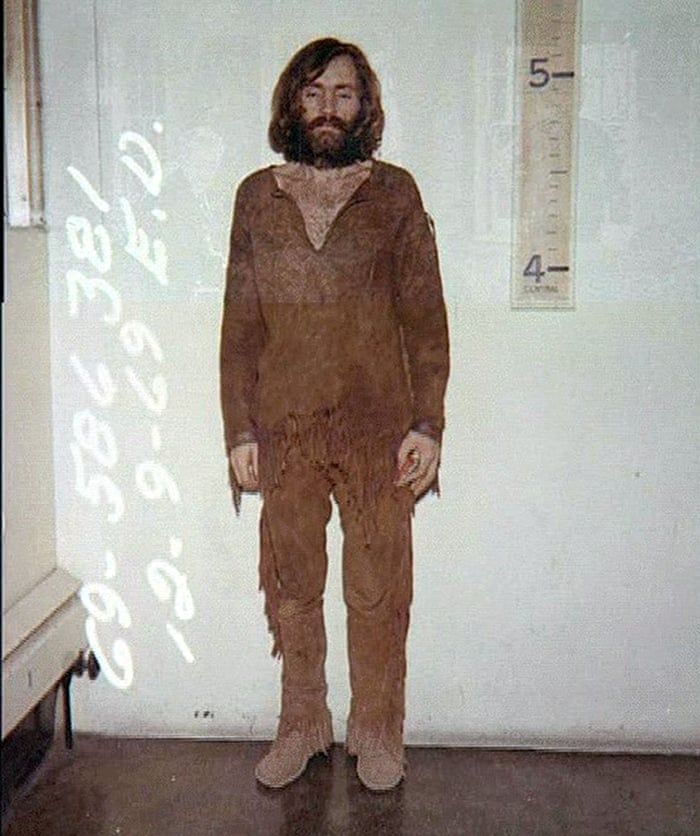 Vincent Bugliosi emphasised the impact of the Manson murders on society when he said:

"The mantra of the era was ‘peace, love and sharing’. Prior to (the Manson case), people just didn't identify hippies with violence. Then the Manson family comes along, looking like hippies, but being mass murderers. And that shocked America: How could this be?”

"The Manson murders sounded the death knell for hippies and all they symbolically represented… They closed an era. The 60s, the decade of love, ended on that night, on 9 August 1969."

Those statements do well to condense the vast amount of research I’ve done that draws the same conclusion about how the ‘Manson murders’ signified the end of an era, and a dramatic shift of culture from that of love and peace, to one of predominantly fear.

I’m not concluding that Manson was innocent in all of this or that he was good or bad, but I am concluding that he was a fundamentally important figure in the changing of American society, but only because he was ‘framed’ as the mastermind of these crimes. 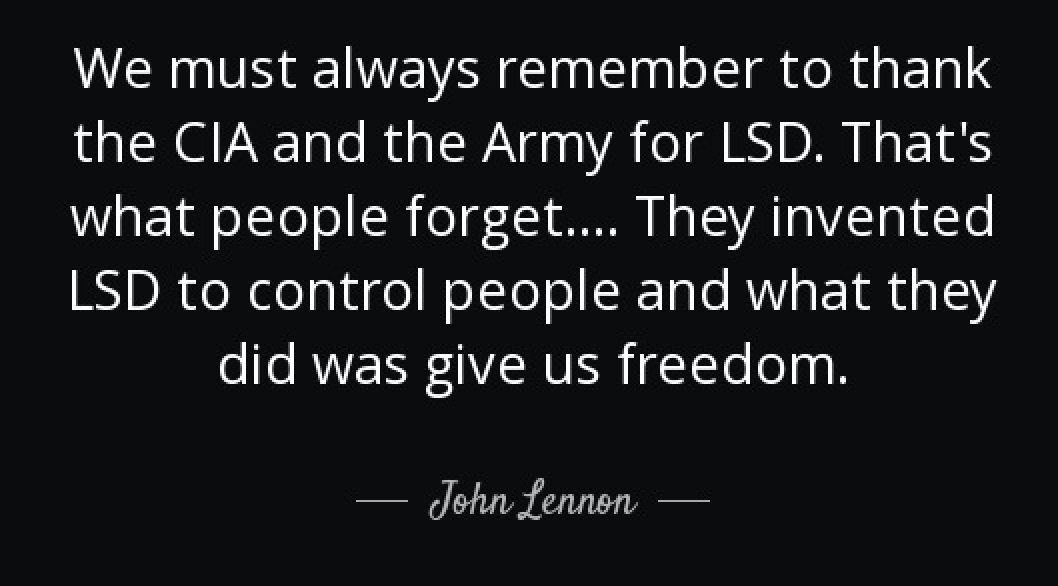 Popular culture and celebrity culture today is dominated by the elite’s agenda to shape and influence young minds. However, it was during the 1960s, when MK-Ultra was in full operation that society was changed drastically forever.

“MKUltra was an extensive testing and experimentation program, which included covert drug tests on unwitting citizens at all social levels, high and low, Native Americans and foreign. Several of these tests involved the administration of LSD to unwitting subjects in social situations.”  - Senator Edward Kennedy at the MKUltra Congressional Hearing of 1977.

The sole purpose of MKUltra was the behavioural modification, or behavioural engineering, of human beings. The need to quell the anti-war and anti-establishment movements of the 60′s forced the elite to infiltrate and disrupt the culture. A series of destabilizing events occurred to shock idealistic minds, and heroes became enemies. The “Peace and Love” of the sixties literally became the fear and depression of the seventies.

The sixties were arguably the most influential decade of modern history and well known for the anti-establishment cultural phenomenon known as the hippy counterculture that developed in the UK and USA and spread throughout much of the Western world. Drugs, in particular LSD, became central to the counterculture of the 1960s and was widely available thanks to government pushers (See MK ULTRA).

The post-war "baby boom" resulted in an unprecedented number of prospective participants in a rethinking of the direction of American and other democratic societies during the sixties, and, as the decade progressed, widespread tensions developed in society regarding the war in Vietnam, race relations, human sexuality, women's rights, traditional modes of authority, experimentation with psychoactive drugs, and differing interpretations of the American Dream. 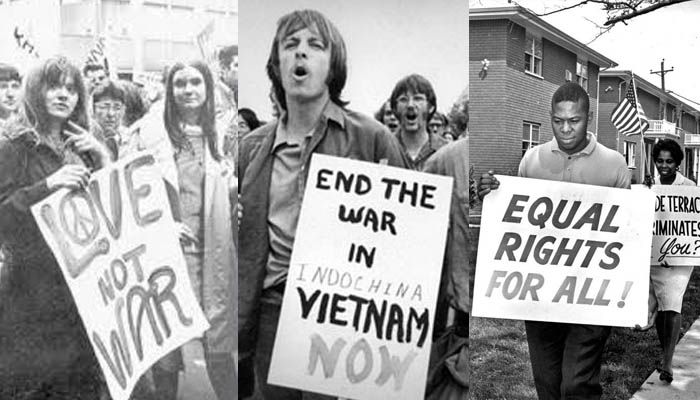 As the era unfolded, a dynamic youth subculture that emphasized creativity, experimentation and new incarnations of bohemian lifestyles emerged. In addition to the trendsetting Beatles, many other creative artists and thinkers, within and across many disciplines, contributed to the counterculture movement.

In the broadest sense, the 1960s countercultures grew from a confluence of events, issues, circumstances, and technological developments that served as intellectual and social catalysts for exceptionally rapid change during the era. It should not be underestimated how influential the drugs were in this change.

The ‘Summer of Love’ was a social phenomenon that occurred during the summer of 1967, when as many as 100,000 people converged on the Haight-Ashbury neighbourhood of San Francisco initiating a major cultural and political shift. (Not coincidentally, Manson resided here after release from Terminal Island in March 1967).  Although hippies also gathered in major cities across the U.S., Canada and Europe, San Francisco remained the epicentre of the social earthquake that would come to be known as the Hippie Revolution, the activities cantered therein became a defining moment of the 1960s, causing numerous 'ordinary citizens' to begin questioning everything and anything about them and their environment as a result.

But, by the end of the 60's the counterculture, which had begun as a progressive social movement bent on changing the world for the better, had all but died…

In October 1968 possession of LSD was made illegal in the US but enforcing stricter laws and banning drugs alone was not enough, a catalyst was needed to change people’s perception.

In my opinion, the so-called 'Manson murders' were used to great effect to bring about an end to the peoples’ revolution.

The plan from the start was to end the hippy era which was an undesired side effect of LSD experimentation. As I’ve explained in my article on MKUltra, the introduction of LSD to society during the 50’s and 60’s was “a social experiment to study human behavioural modification”. LSD resulted in an unwelcome peoples’ revolution. After the drugs were criminalized, the next target was the lifestyle, and Charles Manson, fitting the profile perfectly, was presented as the face of the Hippy Death Cult responsible for the horrific murders.

The longest and most expensive trial in American history kept the story at the forefront of people’s psyche for more than a year after the murders themselves and it was this false narrative that was responsible for one of the greatest cultural shifts in modern times.