BY LMR with extracts from Donald Watkins

For the best part of 200 years the Rothschild family have been dictating international policies. 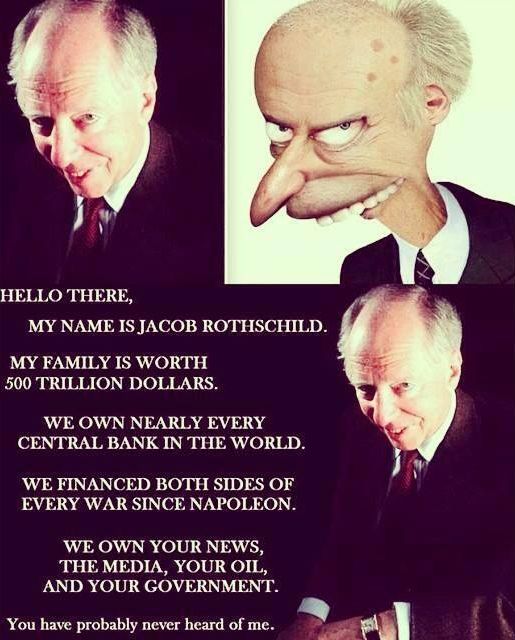 The Rothschild family was the dominant power in European investment banking and brokerage in the nineteenth century.

The Rothschild family made much of their wealth as a direct result of funding both sides in the Napoleonic wars.

Nathan Rothschild funded Wellington’s army and Jacob Rothschild funded Napoleon’s army in the Battle of Waterloo. At that time British bonds were called consuls and they were traded on the floor of the stock exchange. Through the manipulation of the stock market Nathan Rothschild was able to convince traders that England had lost the Battle of Waterloo by instructing his workers on the floor to start selling consuls. This started a chain reaction and other traders started selling frantically. As a direct result the consuls plummeted in value, and this was when Nathan Rothschild instructed his workers to purchase all the consuls they could lay their hands on at knock down prices... When news came through that the British actually won the war, the consuls went up to even higher than before the initial decline leaving Nathan Rothschild with a return of approximately 20 to 1 on his investment.

This gave the Rothschild family complete control of the British economy, now the financial centre of the world, following Napoleon’s defeat and forced England to set up a new Bank of England, which Nathan Mayer Rothschild controlled.

Family members held seats in Parliament and in the House of Lords and they became Barons in London.

By the end of the nineteenth century, the Rothschild family controlled half of the world's wealth.

Nathan Rothschild would go onto brag that in the 17 years he had been in England he had increased the £20,000 stake given to him by his father, 2500 times to £50 million. The Rothschilds also use their control of the Bank of England to replace the method of exchanging money for gold and instead used their banks spread across Europe to set up a system of paper debits and credits, this allowed for the creation of fractional reserve banking, what we know as the banking system of today, where money is created out of thin air, literally. (See Money Manipulation, and The Federal Reserve articles for more detail.)

In 1791, the Rothschilds formed America's first central bank, eventually leading to the creation of the Rothschild controlled Federal Reserve in 1913.

The Rothschild family's banking businesses pioneered international high finance during the industrialization of Europe and America. Rothschild banks financed railway systems around the world. They also financed the construction of the Suez Canal in Egypt. Additionally, Rothschild family capital founded DeBeers in 1888, which is the largest diamond mining company in the world.

In 1987, Edmond de Rothschild created the World Conservation Bank to gain control of land in third world countries, which represent 30% of the land surface of the Earth. The bank assumes the debts of these countries in exchange for real estate that is conveyed to the bank.

By 1995, the Rothschilds controlled an estimated 80% of the world's uranium reserves, thereby giving the family a monopoly over nuclear power.

By 2001, only seven nations in the world -- China, Iran, Afghanistan, North Korea, Sudan, Cuba, and Libya - did not have Rothschild-controlled central banks.

Until May 5, 2004, the price of gold was fixed twice a day at N.M. Rothschild & Sons in London by the world's main Bullion Houses -- Deutsche Bank, HSBC, ScotiaMocatta, and Societe Generale.

The Rothschilds' domination of the world's financial markets continues to this day.

Source and credit to much of the above: The Rothschilds: Controlling the World's Money Supply for More Than Two Centuries by Donald Watkins.

Keep it in the Family

The British Royal family are intimately involved with the Rothschilds and ‘Jewish’ (mask for Zionist) ties. Kate Middleton is Jewish (Zionist). Her mother whose maiden name is Goldsmith, is Jewish and under Jewish law if the mother is Jewish then the children are Jewish, therefore the children of Prince William will be legally Jewish…

The Goldschmidt family (Also Goldsmith) is a prominent family and financial dynasty of German Jewish descent, the family have had intimate ties with the Rothschilds, when I say intimate, I mean it in the literal sense as the families have married into each other on several occasions over hundreds of years:

Maximilian von Goldschmidt-Rothschild (born Maximilian Benedikt Hayum Goldschmidt; 20 June 1843 – 18 February 1940) was a German banker and art collector. The son of Benedict Hayum Salomon Goldschmidt, he was the co-inheritor of the Goldschmidt family bank along with his brother Adolphe Goldschmidt and at one point considered the richest person in the German Empire. He married Minna Karoline Freiin von Rothschild, the daughter of Wilhelm Carl von Rothschild.

Most recently, we have seen the marriage of Ben Goldsmith and Kate Rothschild, these examples are not exclusive, they really do like to keep it in the family.

Some research suggest that Queen Victoria was 'friendly' with Nathan Rothschild, and he fathered some of her children. Although this is near impossible to prove, it’s interesting to note that five lines of the Austrian branch of the family have been elevated to Austrian nobility. Another line, of the British branch of the family, was elevated by Queen Victoria herself, who granted two hereditary titles of Baronet (1847) and Baron (1885) which ennobled the family. To that extent, there was a merging of the two crowns: The Royal Crown of Finance historically, and the Royal Crown of Britain.  The results were many years of conspiracy and cooperation that benefited both houses.

It is no coincidence that the Rothschilds are reportedly widely responsible for the infiltration of the British Royal family, and it is widely speculated by many researchers that their ties are far closer than what I have described here, some researchers even suggest we are soon to have a Rothschild on the throne… This is speculation, but what remains undeniably true is that the so called 'British' Royal family, isn't British at all… It is well documented that George V of the United Kingdom changed the name of his branch from 'Saxe-Coburg and Gotha' to Windsor in 1917 due to anti-German sentiment in the United Kingdom during World War I. So, the ‘British’ Royal family is not at all British, they are from Bavaria, Germany. No link to the Bavarian Illuminati though surely?

The Royals are very good friends of the Rothschilds who have aided the family to gain immense proportions of wealth, not least through the recent designed financial collapse of 2008 where investors made more money than the eventual bailout itself… You can read much more on that in my articles on Money manipulation including details on the Federal Reserve, The International Monetary fund and the World Bank Group, all created by and controlled by the Rothschilds.

By the end of this century, a period that was known as the “Age of the Rothschilds,” it is estimated that the family controlled over half the wealth of the world. Today it is far more…

The official line is that the family’s wealth declined when it was divided between “hundreds of descendants” … The truth is these descendants, many now not under the Rothschild name, are what you may call the ‘placemen’. The Rothschild agents who are operating and controlling almost all major corporate networks across the globe, from communications companies to food corporations, health and medicine, mainstream and alternative media including entertainment, films, and the internet.  And, as has been the case for over two centuries, the banks with which they gained and continue to gain immense political influence world-wide.  They are dictators of policies to government’s worldwide and can be held accountable for almost every act of human caused human suffering across every corner of the globe.

That’s not even the half of it, the food industry is frightening, additives and chemical cocktails are drugging us as much as if not more than the Rothschild controlled pharmaceutical industry is while at the same time these people are banning health foods on the pretence that they are drugs... Hang on, what? Drug people with pharmaceutical drugs which are 'fine' and tell them that natural supplements are drugs and therefore must be banned! It's the same mentality as a Jewish family killing off over 6 million Jews to campaign for the protection of Jews. It's the same mentality because it's the same psychopaths carrying out the same agenda. And they're not Jewish at all, they are Zionists, big difference.

It’s all smoke and mirrors, and we can't believe a word of the mainstream media, they print nothing more than the propaganda, pre-approved as appropriate to the Rothschild/Zionist agenda, because they control the media too.

If there's a conspiracy you can almost guarantee that the name Rothschild will come up if you look at the detail...