Related Articles: Money Manipulation, The World Bank Group and The IMF, The Rothschilds

The Federal Reserve is Unconstitutional

“Congress shall have Power ... To coin Money, regulate the Value thereof, and of foreign Coin, and fix the Standard of Weights and Measures.” 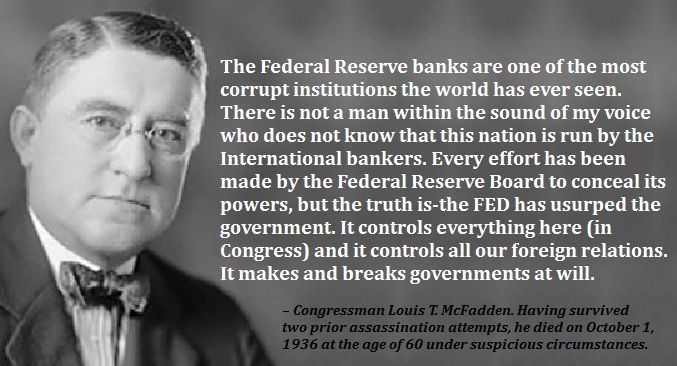 On May 23, 1933, Congressman, Louis T. McFadden (pictured above), brought formal charges against the Board of Governors of the Federal Reserve Bank system. The Controller of the Currency and the Secretary of United States Treasury for numerous criminal acts, including but not limited to, "CONSPIRACY, FRAUD, UNLAWFUL CONVERSION, AND TREASON." The petition for Articles of Impeachment was thereafter referred to the Judiciary Committee and has yet to be acted upon.

In 1791, the Rothschild family gained control of America's money supply through Alexander Hamilton (the family's agent in George Washington's cabinet) when the family established a central bank in the U.S. named the First Bank of the United States, which received a 20-year charter from Congress in 1791. When Congress refused to renew the charter in 1812, the Rothschilds threatened the U.S. with a "most disastrous war" with Britain. The U.S. stood firm. Following through on their threat, a second war broke out between the U.S. and Britain. The British war effort was financed by the Rothschilds. When the war ended in 1815, U.S. finances were in shambles.

By 1816, Congress passed a bill authorizing a second Rothschild-dominated central bank with a 20-year charter. Named the Second Bank of America, this bank gave the Rothschilds control of the American money supply again.

In 1832, President Andrew Jackson led a successful effort by Congress to retake control of America's money supply from the Rothschilds by refusing to renew the charter for the Second Bank of America. Not until 1913 would the Rothschilds be able to set up their third central bank in America.
In the meantime, beginning in 1875, the Rothschilds, acting through their New York banking partner, Jacob Schiff, at the banking house of Kuhn, Loeb, and Co., financed John D. Rockefeller's Standard Oil Company, Edward R. Harriman's railroad empire, and Andrew Carnegie's steel empire using Rothschild money.
The Rothschilds also helped New York financier J.P. Morgan and the Drexels and Biddles of Philadelphia establish European branches of their respective banks in exchange for allowing the Rothschilds to control the banking industry in New York and, therefore, America.
In 1913, the Rothschilds established their last and current central bank in America - the Federal Reserve Bank. This independent bank regulates and controls America's money supply and monetary policies. Even though the Federal Reserve is overseen by a board of governors appointed by the President of the United States, the bank's real control still resides with the Rothschild family. Not even the President can break the Rothschild family's financial grip and influence on the Federal Reserve Bank...
By 2001, only seven nations in the world - China, Iran, Afghanistan, North Korea, Sudan, Cuba, and Libya (All of America's best pals) - did not have Rothschild-controlled central banks.
...The Rothschilds' domination of the world's financial markets continues to this day.
Interest-Free Government Backed Money
Interest free money has been introduced in the US by President Lincoln (assassinated), and JFK (assassinated), their succeeding Presidents immediately revoked it.

US President John F Kennedy signed Executive Order 11110 in June of 1963. This Order returned the power to issue currency to the government without going through the Federal Reserve Bank, the money was issued interest-free and was backed up by the silver reserve. Five months later JFK was dead. 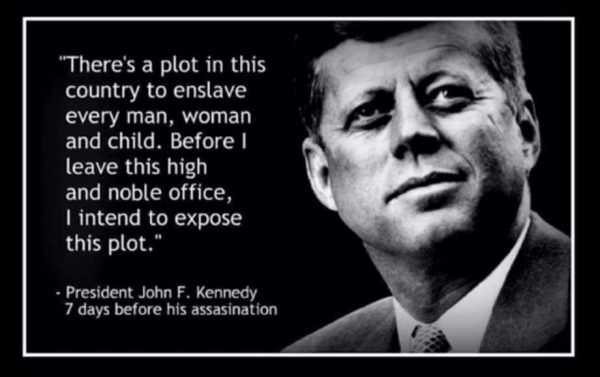 Kennedy's chief of special operations for the joint chief of staff, Fletcher Prouty, and Kennedy's defense secretary, Robert McNamara both say Kennedy wanted to end the war in Vietnam. Prouty says that Kennedy signed Memorandum 263 which stated that all soldiers and other personell would be withdrawn from Vietnam by 1965. McNamara also says Kennedy refused to endorse the introduction of US combat forces in Vietnam.

After his death, just five months after signing Executive Order 11110, JFK was dead. An unelected president, Lyndon Johnson, replaced Kennedy and not only was there no such withdrawal from Vietnam by 1965, but Johnson's first act on the plane (Air Force One), after being sworn in on the flight immediately following Kennedy's death, was to put back into effect the Federal Reserve Act that Kennedy had revoked. He also subsequently paid the $1billion buy out clause that was part of that act.

US President Abraham Lincoln created government interest-free money, so called 'green-back dollars', to pay off the debt from the Civil War. In 1865 Lincoln was assassinated. As with Kennedy's assassination, after Lincoln was killed, the interest-free money was taken out of circulation. Lincoln, like Kennedy, was aware of the corruption taking place, as described in his letter to William Elkins, Nov 21, 1864:

"I see in the near future a crisis approaching. It unnerves me and causes me to tremble for the safety of my country. The money powers preys upon the nation in times of peace and conspires against it in times of adversity. It is more despotic than a monarchy, more insolent than autocracy, more selfish than bureaucracy. It denounces, as public enemies, all who question its methods or throw light upon its crimes. I have two great enemies, the Southern Army in front of me & the financial institutions at the rear, the latter is my greatest foe. Corporations have been enthroned, and an era of corruption in high places will follow, and the money power of the country will endeavor to prolong its reign by working upon the prejudices of the people until the wealth is aggregated in the hands of a few, and the Republic is destroyed."  - Abraham Lincoln

Debt could be eliminated by introducing the interest-free system, but as these articles hopefully help to explain, this corrupt system which controls our lives everyday is designed to create debt and through debt control.

The World Bank Group and The IMF