Religion has been used as one of the most effective tools of control ever conceived. It would be fair to assume, without the need for much research, that more people have died in the name of religion than for any other cause over the course of human history. I suppose you could call that ironic considering most religious figures are deemed to be respectable members of society. Some are, many are not – we will mention the Catholic Church again later…

It is estimated that there are over 4000 different types of religious bodies, denominations, faith groups, tribes, cultures, or movements worldwide, each with a differing view to the next. One thing that is certain is that they can’t all be right, but what’s also true is that regardless of who is right, most of us must have got it wrong.

The Christian religion is based entirely on the Bible and the literal existence of a man named Jesus even though there is not a shred of physical evidence that Jesus existed, and there is no historical foundation for the gospels. They are far more likely to be symbolic and not literal, but it should also be considered that the Bible itself has been rewritten, deliberately altered and mistranslated many times. There are over 50 variations of the Bible in English, the most widely referenced is the King James version, that is, the version that King James authorised for public distribution. Who is King James, or anyone else for that matter, to alter the so-called word of God?

My personal beliefs are that most ‘traditional’ religions are slightly different interpretations of the same stories and ancient accounts, although they have been seriously manipulated and altered over time. Despite these manipulations, alterations, and mistranslations it is still quite incredible to compare some of the religious texts and ancient accounts of communications with the gods. Many of the stories repeat with slight variations, but the theme, ultimately, remains the same.

From my article, The Illuminati:

According to Sumerian documentation, Atlantis would have been a highly integrated city of humans and Anunnaki, and children were born of these unions. (Anunnaki translates to ‘those from heaven to earth came’, they were considered Gods) Atlantis had great power and sought to spread its civilization far and wide and was well on the way to world domination before its destruction. The reason for the destruction of Atlantis comes from the Anunnaki high counsel, (according to the book of Enki) who saw it unfit for humans and Anunnaki to wed. It was decided to wipe out the human population through a flood that was predictable when, Nibiru, passes thru the inner solar system again. Enki, having originally created the humans, was sympathetic and saved some of them from the flood by instructing some humans, to build a grand vessel…

It sounds like Noah’s Ark to me. Yet tales of the Flood spring from many sources throughout religious and ancient texts, this example is not exclusive. Nearly every ancient culture told its own set of creation myths and they share a remarkable number of similarities with the Adam and Eve story: humans fashioned from clay, a trickster figure who subverts the gods' plans for creation (almost always a serpent or reptilian creature), and a woman taking the blame for sin and pain. The Adam and Eve myth is one of the most commonly recurring accounts, each time told a slightly different way, but with undeniable symmetry.

The main form of communication in the ancient world was symbolism and parable. The Ancient Egyptians, for example, told the mythological stories of Horus and Set who were constantly at war with each other over the rule of Egypt. (Horus was the Egyptian God of light and Set was the God of Darkness - Horus-sun or Horizon, and Sun-Set). The stories are symbolic of the sun rising and setting each day, they are not to be taken literally. Christianity would be far better understood if we approached the texts from this point of view rather than taking them as Gospel. (Sorry, I had to slip that in somewhere).

Christianity relates to ancient sun worship, and is the result of recycling other historical accounts, religions, ancient texts, and myths. The story of Christianity, in all its detail, has been told the world over for thousands of years before the alleged birth of Jesus.

In brief, Jesus was born on December 25th, travelled with 12 disciples, began his father’s work at the age of 12, began his ministry at the age of 30, performed ‘miracles’ and ‘healing’, died on a cross and then rose from the dead 3 days later.

Now consider that the ancients recognised that the sun makes an annual southerly descent until December 21st/22nd, then it stops moving for three days before it starts to move north again. During this time, known as the winter solstice, the ancients declared that "God's sun" had "died". This was symbolic of the 3 days of darkness when the sun stops moving. But the sun is symbolically resurrected or born again on December 25th. This is not some ancient misunderstanding or factual inaccuracy, this happens: The winter solstice marks the shortest day of the year and the longest night of year. Once it has reached this lowest point, the sun appears to stop moving south for three days before moving 1° north, announcing the coming of spring.

The Suns journey through the year is symbolised by the sun cross (below), a widely recognised ‘Christian’ symbol that is not Christian at all and has been used since ancient times. The cross represents the summer and winter solstices, (hence the sun died on the cross). Ancient kings in Egypt and elsewhere used this symbol to represent their highest power - the sun. The swastika is another variation of the sun cross, featuring bent arms in a turning motion. This symbol was considered a good luck charm and used around the world by many cultures until Hitler and the Nazis adopted it and it obscured its true meaning. 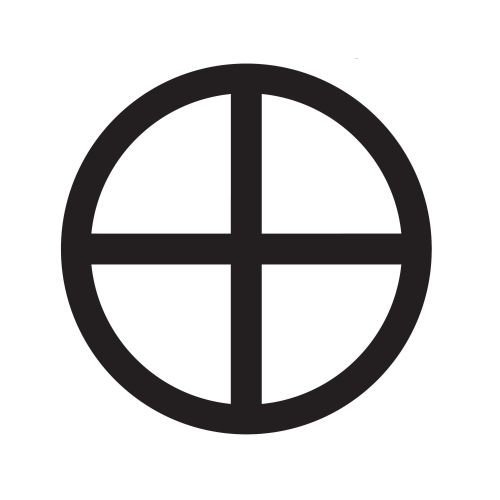 Above: The Sun Cross as often interpreted by Christianity

Below: Tablet of Shamash, displaying the sun cross, approximately 9th Century BC 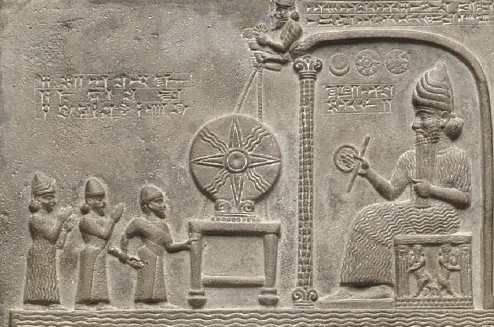 The Zodiac (below) is another ancient symbol used to represent the suns apparent path across the celestial sphere over the course of a year as the sun passes through the 12 signs of the Zodiac. The Sun enters each sign of the Zodiac at 30°, (12 X 30° = 360°). Jesus began his father’s work at the age of 12 and began his ministry at the age of 30. 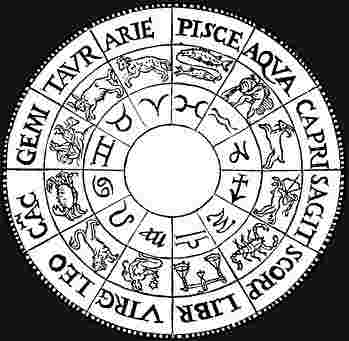 The ancient people considered the sun to be the ‘giver of life’, the ‘light of the world’ and the ‘saviour of mankind’. They understood that without it crops would not grow and life itself could not be. The sun can be said to perform miracles in terms of feeding many people from apparently nothing (it grows crops), it has the power to heal (sunlight plays a crucial role in fighting disease), it can turn water into wine (rainwater to grow grapes for wine) and walk on water (it appears to walk on water via reflection).

Dionysus was a Greek God who appeared in ancient accounts thousands of years before Jesus. Dionysus was a descendant of Zeus and mortal woman Semele. He could turn water into wine, was identified with the Ram (Jesus was known as the lamb of God), he was hung on a tree (crucified), descended to the Underworld, and was resurrected three days after his death.

Several other Gods have similar stories to Jesus including: Apollo; Hercules and Zeus of Greece; Adad and Marduk of Assyria; Buddha Sakia and Indra of India and Tibet; Salivahana of southern India and Bermuda; Osiris and Horus of Egypt; Odin, Balder and Frey of Scandinavia; Crite of Chaldea; Zoroaster of Persia; Baal (Bel) and Taut of Phoenicia; Bali of Afghanistan; Jao of Nepal; Wittoba of Bilingonese; Xamolxis of Thrace; Zoar of the Bonzes; Chu Chulainn of Ireland; Deva Tet, Codom and Sammonocadam of Saim; Alcides of Thebes; Mikado of the Sintoos; Beddru of Japan; Hesus or Eros, and Bremrillaham of the Druids; Thor, Son of Odin, of Gauls; Cadmus of Greece; Hil and Feta of Mandaites; Gentaut and Quetzalcoatl of Mexico; Universal Monarch of the Sibyls; Ischy of Formosa; Divine Teacher of Plato; Holy one of Xaca; Fohi, Ieo, Lao-kium, Chiang-Ti and Tien of China; Jupiter, Jove, Ixion and Quirnus of Rome; Prometheus of the caucasus; Mohammed or Mahomet of Arabia; Dahzbog of the Slavs; Mithra of Persia, India and Rome.

Fundamentally, most, although certainly not all, religious people are good people, with good intentions. It is their religion that has been infiltrated and manipulated. Ultimately all these religions seem to fuse and connect, each has their own set of symbols and scriptures, but they are much like any secret society as described in my other articles. The symbolism is given different interpretations depending on your level of initiation. Most people who follow these religions have no idea what the true meaning of the symbolism is. It is my belief through detailed research that almost all these religions at their core are symbolic for what we would today call satanism. Inversion is the technique so often used to hide the true nature of what something is really about, and Religion is a perfect example of this.

No greater example of where Satanism has bled through the core is the Catholic Church. It is a cesspit of paedophiles and murderers – It’s the biggest open secret, everyone knows that the Catholic Church is a front for a worldwide institution of child abuse. As for Judaism, if inherent paedophilia isn’t obvious then what on earth are those mohel doing putting babies’ genitals in their mouths during the sick ritual that is called metzitzah b'peh?  This is a Jewish circumcision, performed by a mohel, (a Jewish person specially trained in the craft of circumcision - weird career choice). After the mohel cuts off the foreskin, he uses his mouth to effectively clear the wound on the baby's penis of blood. If that isn’t a satanic ritual, then what is? Thankfully this disgusting method has come under criticism in recent times, but sadly only after several babies have died after picking up sexually transmitted diseases, and shockingly, it’s still practiced and considered ‘normal’ today.  It seems religion hasn’t finished damaging lives yet…