The name ‘Illuminati’ came from the Zohar which is a body of works in the Jewish mystical ‘bible’ called the Kabbalah. ‘Zohar’ is the foundation of Sabbatian-Frankist belief and in Hebrew it means ‘splendour’, ‘radiance’, illuminated’.

Sabbatian-Frankism combines the names of two men, Sabbatai Zevi (1626-1676) a rabbi, black magician and occultist who proclaimed he was the Jewish Messiah; and Jacob Frank (1726-1791), the Polish ‘Jew’, black magician and occultist who said he was the reincarnation of ‘messiah’ Zevi and biblical patriarch Jacob. Jacob Frank formed an alliance in 1773 with Mayer Amschel Rothschild (1744-1812), founder of the Rothschild banking dynasty, and Adam Weishaupt (1748-1830), a German philosopher, this led to the formation of the Bavarian illuminati in 1776.

Judaism has been infiltrated by Sabbatian-Frankist cultists who hide behind the Jewish religion, they are not Jewish at all. They reject the Jewish Torah, or Pentateuch, the ‘five books of Moses’ in the Old Testament which are claimed by Judaism and Christianity to have been dictated by God to Moses on Mount Sinai.

Infiltration has been the foundation technique of Sabbatian-Frankism from its official origin in the 17th century. Zevi’s Sabbatian sect attracted what was described as the biggest messianic movement in Jewish history, spreading as far wide as Africa and Asia, and he promised a return for the Jews to the ‘Promised Land’ of Israel. (Read Genocide in Palestine article here)

Infiltration of the Roman Church and Vatican was instigated by Frank with many Dönmeh (The Dönmeh were a group of Sabbatian crypto-Jews in the Ottoman Empire who converted outwardly to Islam) ‘turning’ again to covert to Roman Catholicism with a view to hijacking the reins of power. This was the ever repeating modus operandi and continues to be so - Pose as an advocate of the religion, culture or country that you want to control and then manipulate your people into the positions of authority and influence largely as advisors, administrators and Svengalis for those that appear to be in power. They did this with Judaism, Christianity, Islam and other religions and nations until Sabbatian-Frankism spanned the world as it does today.

They claim to be the ‘illuminated ones’, their knowledge systematically hidden from the general population and passed down through interbreeding bloodlines and initiates of a vast network of interconnecting secret societies and well known organisations from governments, banks, businesses, media corporations, Freemasons, Round Table Organisations such the Bilderberg Group, the club of Rome, Council on Foreign relations, Trilateral commission, the Royal Institute of International affairs, the United Nations and NATO and many more.  All institutions ultimately fuse into the same elite thus allowing the same agenda to be orchestrated from apparently different areas of society - If you want to control the game, you have to control all sides, and this is exactly what they do. 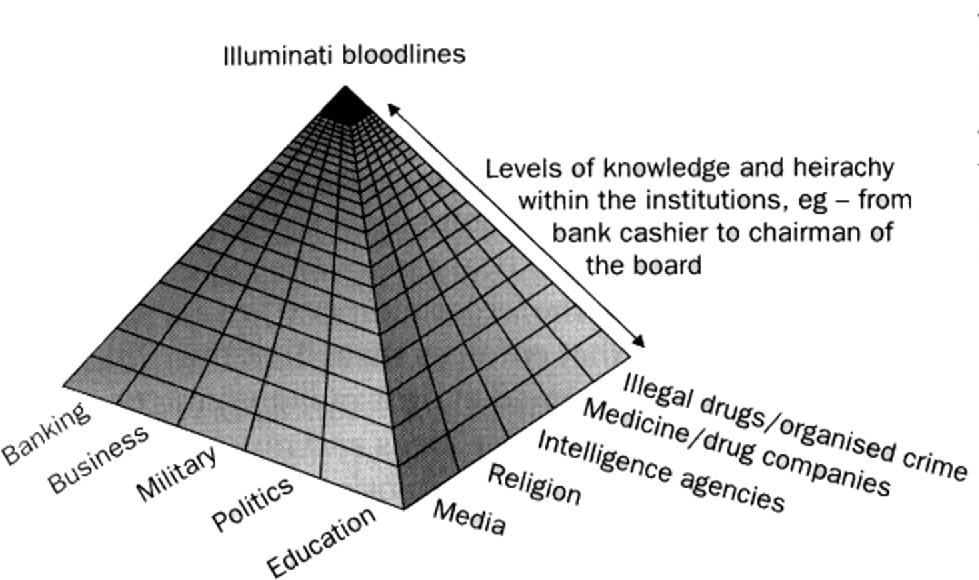 The network operates within a compartmentalised pyramid structure, the few at the top hold all of the knowledge (the illuminated ones), while those further down the pyramid may come in greater numbers, they only know what it is necessary for them to know to play their part; the further down the pyramid you get the more ignorant you are of what the ultimate goal is. The structure of Freemasonry is a perfect example of this. There are 33 degrees of initiation in the Scottish Rite of Freemasonry, those initiated higher are taught the true meaning of the symbolism and the organisation itself, while those lower down have no idea and are deliberately fed false information. Nobody except those at the top know the true agenda. 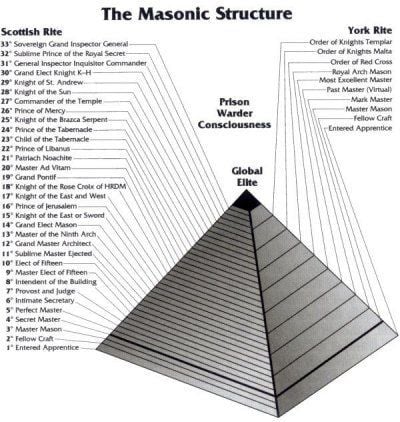 Symbolism is their main method of communication and this can be seen throughout everything that they do and represent. One such symbol is the ‘light bearer’ or the ‘bringer of light’ – symbolic of the hidden knowledge, the light ‘illuminates’ that which we cannot see. Represented in many forms, this can be most easily recognised as the Statue of Liberty, a gift to America from French Freemasons. From the first Initiation a Mason is urged mightily to "seek the Light"! The light bearer is another interpretation of Satan, who is also known as the ‘light bearer’, or ‘bringer of light’ and an inversion of Christ (the ‘light bearer’, ‘bringer of light’) and many other religious figures who were interpretations of the same ‘stories’. 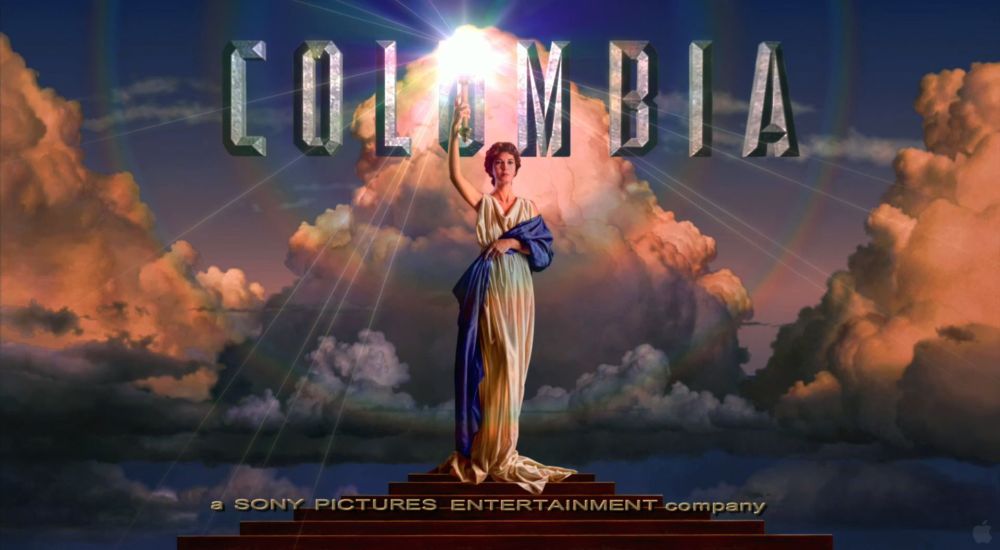 Just one example of many where we see symbolism used in mainstream entertainment and media.  See my film, symbols of the illuminati below for more background on symbolism.

Their work across two centuries has helped establish the Sabbatian-Frankist cult that plays a central role in the manipulation of human society by the Global elite which has its origins much further back in history that Sabbatai Zevi.

Six thousand years ago, a great civilisation was born. They were the Sumerians, who lived in what is now modern-day Iraq. Zecharia Sitchin claims in his work to have discovered through their ancient texts, that humankind was created by extra-terrestrial beings, the Anunnaki, (literally translates to ‘those from heaven to earth came) who come from a 12th planet, which Sumerians called Nibiru.

The Sumerians are the originators of many of the biblical tales.  In Sumerian tablets from around 4000 years ago the story of Adam and Eve can be found, in a picture depicting two anunnaki standing next to a tree of life and a symbolic reference to a winged craft with someone flying it, perhaps this is the true origin of Noah’s ark… 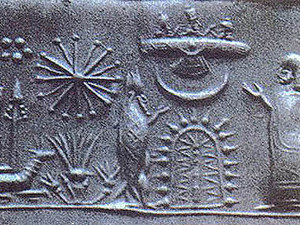 Clear links to the biblical Noah’s ark story can be found in these Sumerian and other ancient texts too, way before Christianity; Atlantis, an advanced civilization was suddenly struck, by a cataclysmic event that sank it beneath the sea. Greek mythology makes reference to Atlantis, it states that a large comet in the sky was responsible for its destruction. Some writings come from Sumer (meaning "land of the guardians"), Babylon (meaning "gate of the gods" and where London gets its name – Baby-Lon-Don), and other civilizations of ancient Mesopotamia.

According to Sumerian documentation, Atlantis would have been a highly integrated city of humans and Anunnaki, and children were born of these unions.  Atlantis had great power and sought to spread its civilization far and wide and was well on the way to world domination before its destruction. The reason for the destruction of Atlantis comes from the Anunnaki high counsel, (according to the book of Enki) who saw it unfit for humans and Anunnaki to wed. It was decided to wipe out the human population through a flood that was predictable when, Nibiru, passes thru the inner solar system again. Enki, having originally created the humans, was sympathetic and saved some of them from the flood by instructing some humans, to build a grand vessel… Is this sounding familiar yet...?

Of course, it’s just one of the many historical versions of Noah’s ark.

According to the bible, Noah's ark held two of every species, (talk about a logistical nightmare), it is of course unlikely that such a vessel was ever constructed. It is not however, beyond the realms of possibility that an advanced civilization facing impending disaster might try to save itself by collecting the DNA of every species and shipping it off to somewhere safe to start again. Perhaps not animals two-by-two in a boat or ‘ship’ but DNA in a space-‘ship’ or aircraft? It certainly makes a whole lot more sense when you consider Atlanteans taking DNA samples rather than actual animals to use as the basis to start a new civilization in Sumer - If we had somewhere to go, it wouldn't be beyond the realms of possibility that we could do this ourselves as a species tomorrow, we have been collecting, storing and growing organisms from DNA for many years already and it's widely accepted, although debated, that we have the technology to travel to space and beyond.

In Sumerian tablets, ancient texts and the regurgitated religious texts that followed, there are common references to ‘the Golden Age’, which came before ‘the fall of man’. This story is represented in the book of Genesis where Adam and Eve are said to be the first man and woman on earth in the Garden of Eden.  All is well until Eve is tempted by a serpent and eats the forbidden fruit from the tree of life.  This ‘forbidden fruit’ which eve is ‘seduced’ into eating is clearly metaphorical… Eve, representative of the human, had sex with a serpent being. Sorry Vicar. 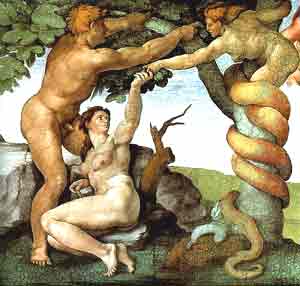 All over the planet, you find the ancient legends and accounts of "gods" from another world who interbred with humanity to create a hybrid network of bloodlines.  The Old Testament, for example, talks about the "Sons of God" who interbred with the daughters of men to create the hybrid race, the Nefilim. Before it was (mis)translated, that passage read "the sons of the gods", plural.  But the Bible accounts are only one of so many that describe the same theme; The Sumerian clay tablets, found in what we now call Iraq in the middle of the 19th century, tell a similar story. It is estimated they were buried around 2,000 BC, but the stories they tell go back long before that. The tablets talk of a race of "gods" from another world who brought advanced knowledge to the planet and interbred with humans to create hybrid bloodlines.

The ancient accounts tell us that these hybrid bloodlines, the fusion of the genes of selected humans with those of the "gods", were put into the positions of ruling royal power, especially in the ancient Near and Middle East, in advanced cultures like Sumer, Babylon, and Egypt. From these bloodlines has come the origin of the "divine right of kings", the belief that only certain bloodlines have the God-given right to rule. Even in 2021 we have someone on the throne in England who is there because of her bloodline – yep, sounds like a cult to me.

Reports about serpent gods from the sky and serpent people date back to the earliest human writings, storytelling, and myths. Ancient texts report that ancient people believed in many gods (good and evil) plus they believed in two races of man - the serpent race who looked like and acted like their serpent god, and the humanoid race that looked like and behaved like their god, as described in the Emerald Tablet of Thoth, Tablet 8;

"In the form of man they amongst us, but only to sight were they as are men. Serpent-headed when the glamour was lifted but appearing to man as men among men. Crept they into the Councils, taking forms that were like unto men. Slaying by their arts the chiefs of the kingdoms, taking their form and ruling o'er man. Only by magic could they be discovered. Only by sound could their faces be seen. Sought they from the Kingdom of shadows to destroy man and rule in his place…” 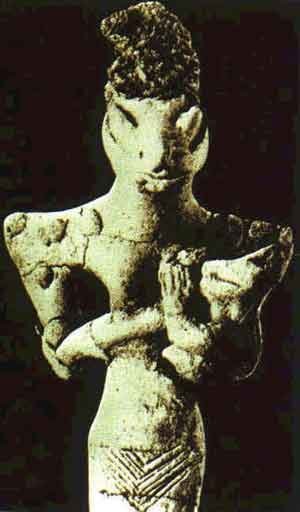 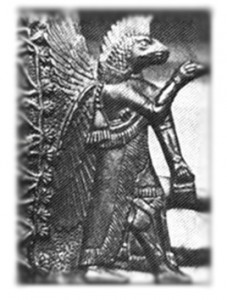 These reptilian-human hybrid bloodlines became the royal and aristocratic families of Europe and, thanks to the British and European empires, they were exported to the Americas, Africa, Australia, New Zealand, and the Far East and, of course, China where the symbolism of the dragon is to this day the very basis of their culture. 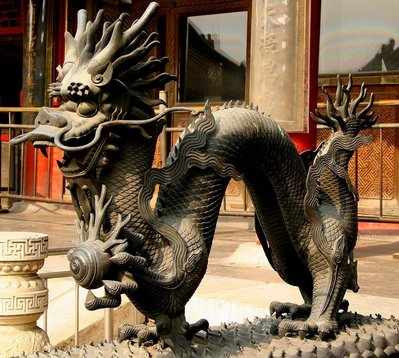 “Independence” was given to these lands when the British/European empires had suitably restructured the political systems and put their illuminati frontmen in the highest positions of power to carry out their agenda covertly.

Learn more: Who are the 13 Illuminati Bloodlines?